One Marketing Funnel To Rule Them All 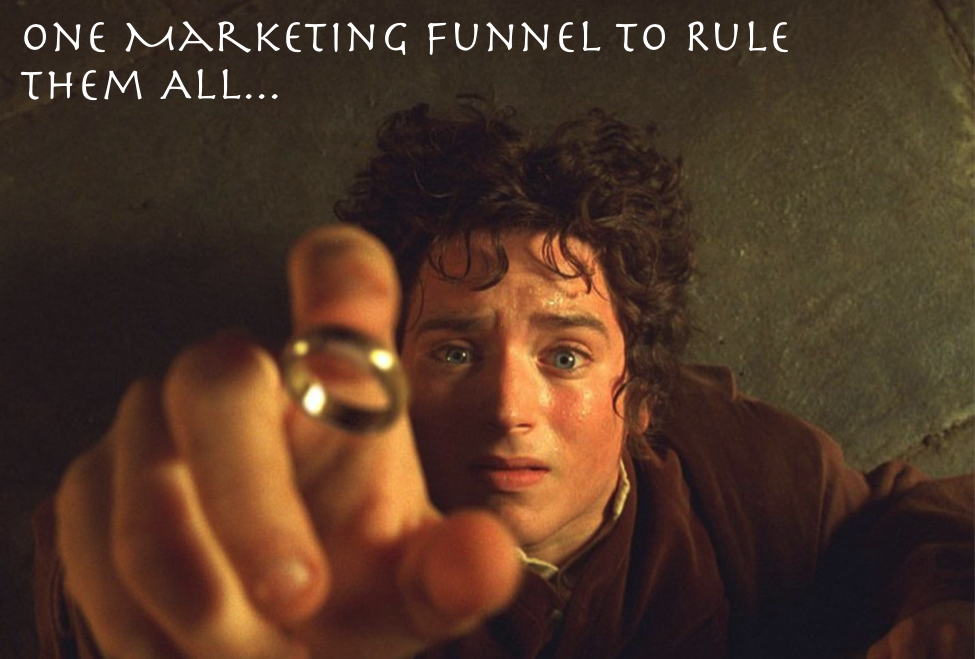 “It began with the forging of the Great Funnels.

Three were given to the Elves, immortal, wisest and fairest of all beings. Seven to the Dwarf-Lords, great miners and craftsmen of the mountain halls. And nine, nine rings were gifted to the race of Men, who above all else desire power. For within these rings was bound the strength and the will to govern each race.

But they were all of them deceived, for another funnel was made. Deep in the land of Mordor, in the Fires of Mount Doom, the Dark Lord Sauron forged a master funnel in secret… One funnel to rule them all.”

Forgive the pun. I couldn’t help it.

This article is about marketing funnels.

My most recent win is creating the entire marketing funnel for a weight loss membership program. It’s created over 3000 full paying members in less than 2 months.

I have a knack for funnels because of one basic quirk in my thinking. I think of marketing and copywriting in terms of systems and processes.

It’s not just a VSL, or sales letter, that sells people. It’s the entire process of going from complete ignorance about you and what you offer…

To falling in love with you,
wanting to become one of your tribe…

Now, when I named some of these funnels above, most copywriters and marketers will have a sort of mental checklist their head they’re ticking off. Silently nodding to themselves:

Trust me on this, you may know funnels in a tactical, or even a strategic sense. Enough for you to write the copy.

But it isn’t enough for you to build an enduring, ultra-profitable BUSINESS for and with a client.

You need to think bigger. And higher. And broader.

I call it the “Lord of the Rings” Funnel…

In order to build an encompassing funnel that builds 7, 8 and 9-figure businesses, what you’re likely missing is the mindset. The mindset of the market. Let’s discuss that now.

However, you may say…

“Oh no, Matt! That’s where you’re wrong. I know the mindset of my market like the back of my hand. I did my interviews. I wrote out my buyer persona. I’ve done my research.”

And if you said that, I just proved my point. Because there is not ONE single mindset of the market.

There are actually SIX market mindsets
within a single market.

Yeah, SIX. Each one integrally linked to a specific stage and phase of your business’ marketing funnel, regardless of how it takes shape…

What you want to do in shift a person’s mindset through 3 stages and six discrete phases.

Now at this point, if I do my job right, you’re about to have an epiphany. And this epiphany will be so big and come on so strong, it will haunt you for the rest of your marketing and copywriting life.

What this epiphany will also do is get you thinking bigger, get you off the one-off marketing funnel campaign-itis treadmill and into true business-building.

If you’re going to help build an enduring business with a client, THIS is the marketing funnel that lays the foundation for everything else to come…

Marketing Funnel Stage #1: Cognitive – “I am aware of you”

The first mindset stage your prospect is one of cognition. They know you’re out there. They become aware They know YOU are in the market in some what shape or form.

They don’t know who you are or what you do or how you do it.

To them? You exist. That’s all. You a blip on their radar.

They don’t even consider themselves a prospect (yet.) Maybe YOU think they may be, but they don’t. It’s too early in the relationship.

Now in order to get to the next major stage, the prospect naturally, effortlessly, goes through two distinct phases. 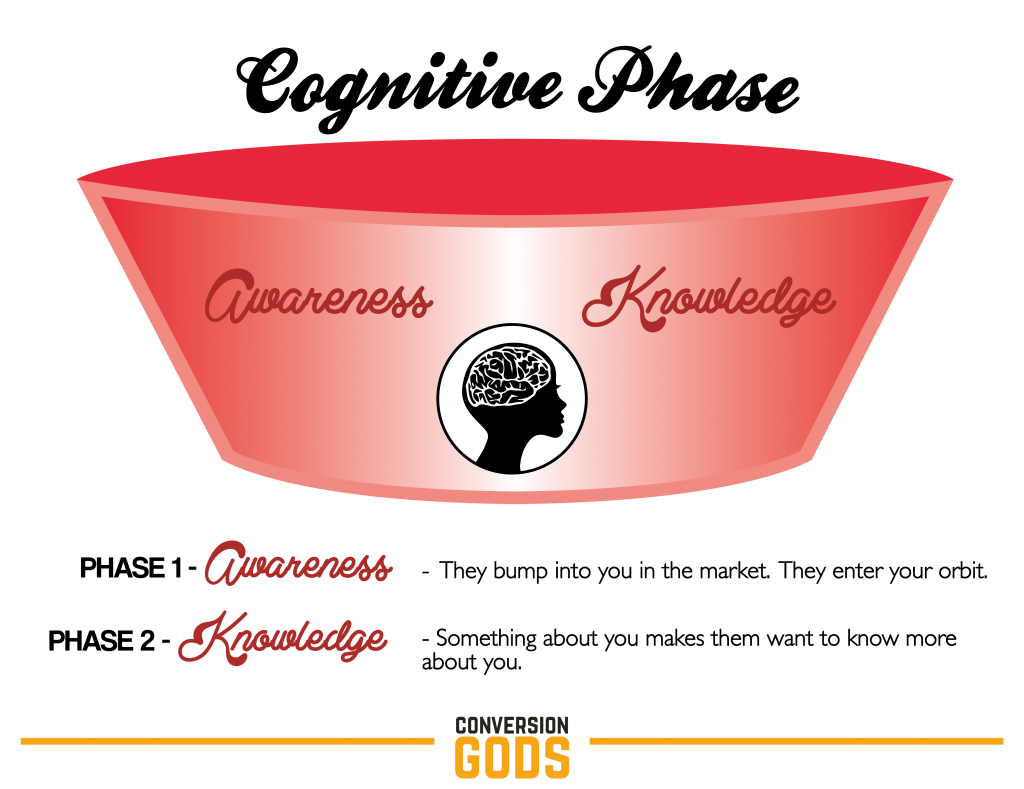 FIRST the prospect becomes aware, THEN they start to become knowledgeable. Not necessarily in a research gathering way, but more of a “Let me Google him for a moment…”

This distinction is critical to your success.

During this stage, your “prospect” isn’t even a prospect for whatever it is you offering (unless it’s free.) Don’t even try at this point, it’s premature.

But as you are probably aware, most marketers won’t heed this advice.  They’ll pitch something.  Anything just to create a buyer.

(Note: Those CAN and DO work. Especially in situations where a JV/affiliate RELATIONSHIP is already present and they’re pitching the offer to their list with their recommendation.)

However, if you try to sell too early, this stage is like you’re in a mall, and you pass an interesting storefront and you quickly go inside. And the salesperson practically jumps on you and in an overly cheerful voice says “How can I help you today?!”

Usually You’ll scare them away.

In reality, the only thing you have going for you at this stage is the emotion of… Curiosity. And they have some money in their pocket.

If you’re smart, you’re going to do something with that emotion.

What you do with that person’s curiosity depends upon your specific business, but you must do something with it to ESTABLISH A RELATIONSHIP in a non-threatening way.

Because that’s where the money is.

Let’s look at this online and see what happens.

A person enters your orbit with a curiosity-provoking article from you in their FB feed. They click on it and the fun begins…

Marketing Funnel Stage #2: The Affective Stage – “I like you”

The next significant stage of a business’ marketing funnel, if you were smart and established the initial relationship is to strengthen the bond.

This stage is where you affect them EMOTIONALLY them in some way shape or form. This is the “feeling stage.” They like you, and maybe they like you a lot. 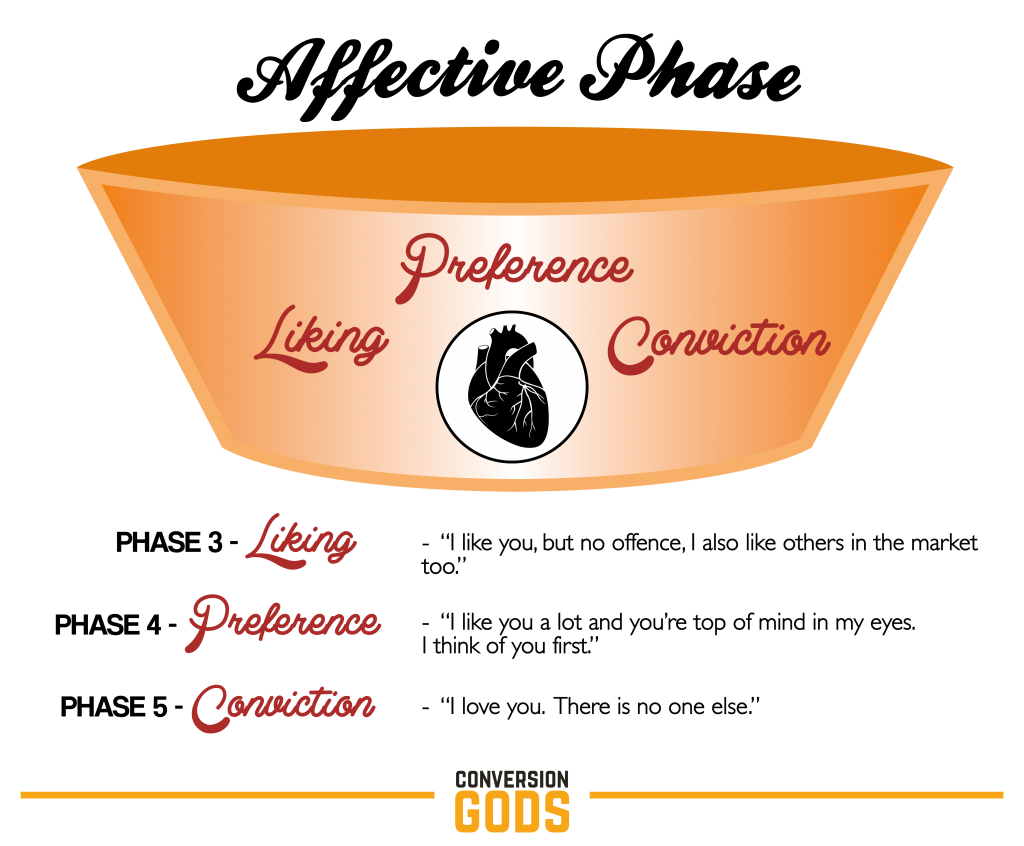 Done right, the prospect passes through all three of these stages.

What are you going to do, now that they like you?

Your motive? Not to make money, necessarily. You may even lose money on the initial transaction. But it’s ok. You’re an astute marketer, you’re building a base and you’re thinking long term.

In their eyes, you’re proving yourself. You’re building trust. You’re being consistent with who you portray yourself to be in the market.

So because you are smart and developed a relationship, you’re cultivating that relationship. Either quickly or slowly.

Yes, I said “quickly.” In less than 30 minutes, you can have their conviction. Willing to spend several thousand dollars with you.

(This is how the cold traffic marketers make their gazillions.)

Marketing Funnel Stage #3: Behavioral – “I want to be a customer.”

If you done your job right, the prospect will NATURALLY go from awareness, to liking, to taking the action, actually doing things as a part of your tribe. This will be almost effortless for the prospect.

They’ll want to do it. Very little pressure or even incentive is required. 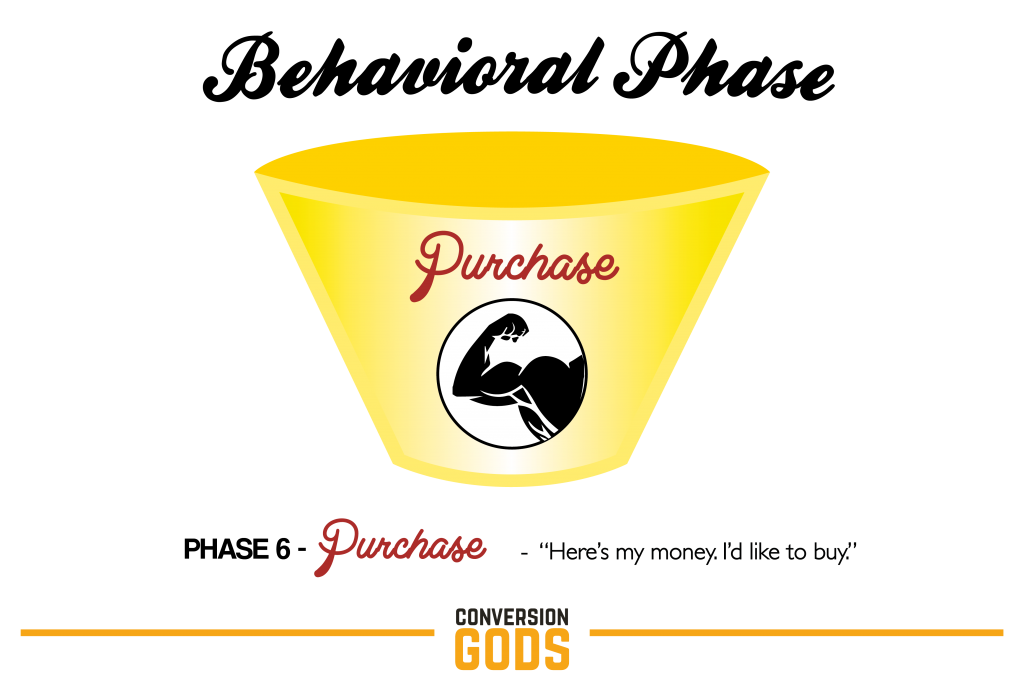 Again, it you do it right, they’ll buy for three significant reasons:

If you follow this meta-marketing funnel model, regardless of your specific marketing campaign, online or offline, you’ll be building an enduring business.

The more you can systemize/automate it, the better it will be.

The One Funnel To Rule Them All… 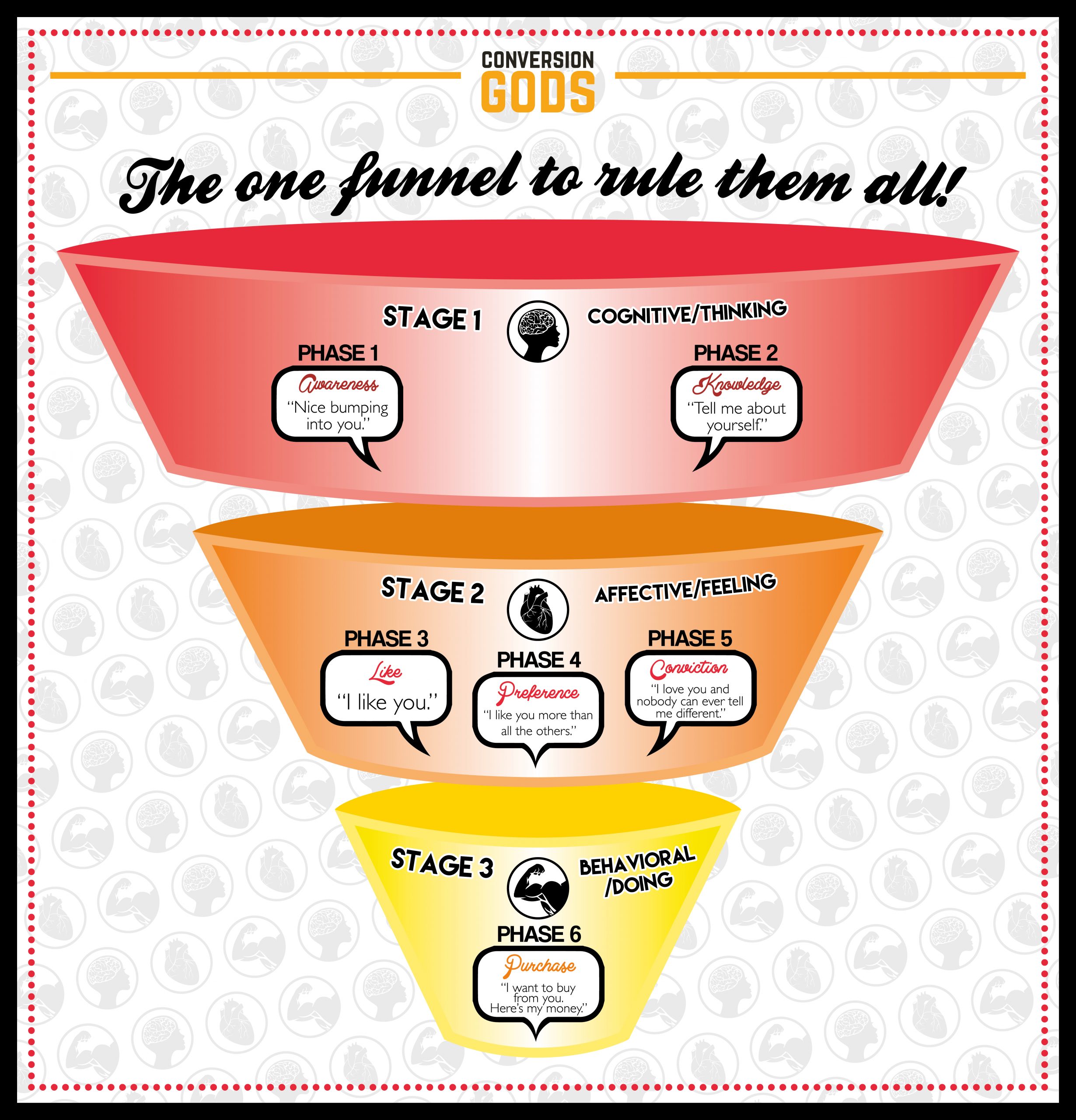 Some marketers proceed with this funnel slowly building curiosity, credibility, trust and interest over time…

Other marketers have a far more aggressive approach. For instance, I’ve used this model in a single VSL for a supplement recently promoted heavily on YouTube. With traffic being driven by a YouTube preroll ad. We’re in the processing ramping up to $3mm a month.

It’s harder for sure, but it can be done. I’ve done it many times.

In the context of the Lord of the Rings Funnel, feel free to use all the different funnels you’re already aware of. Just make sure it has a place inside the one funnel that rules them all. 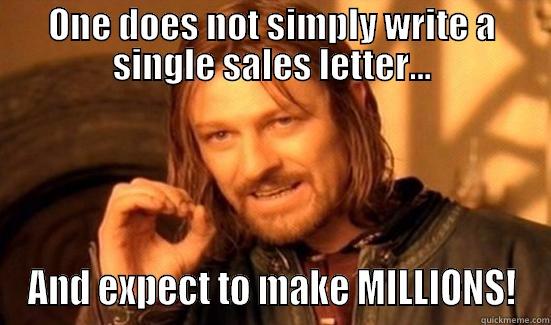 Good luck and if you need help implementing, just holler. My email is matt@conversiongods.com

PS: Did you get your marketing funnel epiphany? I hope so. I really do. This funnel has added multiple zeroes onto my clients and partners bank account balances. More importantly, it’s built enduring businesses, not just one-off product launches.

I hope it does the same with yours. 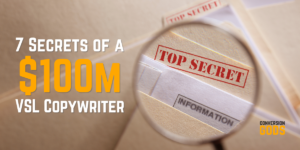